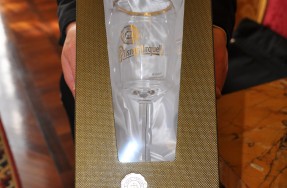 The shipment of the blessed Pilsner Urquell beer sent to The Holly See counts 2012 bottles symbolising this year. The gift was submitted today, April 4, 2012, right before noon in The Palace of Apostles. Representatives of the Vatican government Tarcisio Bertone, State Secretary and Msgr. Dominique Mamberti, Minister of Foreign Affairs, were there to accept the gift. By submitting this gift, Pilsner Urquell continues the tradition established last year, when they sent a gift of 2011 bottles of blessed Pilsen beer to the Vatican to celebrate the beatification of John Paul II.

„Our Pilsen beer appeared at the Vatican sporadically in the past, and we are now trying to revive this tradition and to build a new tradition of sending blessed beer from Pilsen to the Vatican every Easter. For example, in 1890, Pope Leo XIII regularly drank Pilsen lager as a remedy during his recovery,“ Jan Šolta, Pilsner Urquell brand Manager said, and added: „I  have to admit that the Easter spirit is present at every step here, at the Vatican, and the ceremony accompanying the acceptance of our premium lager itself was very impressive.“

The second part of the special Easter greeting is an original, handmade beer chalice. It was made by designer Lars Kemper in collaboration with the master glassblowers of Lasvit Comp. in Nový Bor. The production of the 0.3l glass was very elaborate and took 20 days. The designer, inspired by the Pilsner Urquell lager itself, steeped the chalice in long–lasting tradition while also incorporating more modern designs. The chalice is hand blown from sodium potassium crystal.

„As a very nice tradition, many countries like to present themselves at The Holly See by sending a gift representing the best of their national treasures. With pride, we have presented the gift of the blessed Pilsen beer to the Vatican this year again. It gives me much pleasure to know that the gift also represents an organic symbiosis between the church and our society in everyday life,“ Pavel Vošalík, Czech Ambassador at The Holly See said.

The gift, together with the Certificate of Origin, ceremonially left the Pilsen brewery on April 26 when it was sent on its way by František Radkovský, Bishop of Pilsen, and Václav Berka, Senior Master–brewer of the Pilsen Urquell Company. The blessed batch was prepared according to the original recipe, and the beer matured for about 5 weeks. Symbolically during this year’s Lent period. Samples of blessed ingredients and a copy of the beer chalice made for the Pope are displayed in the Beer Brewing Museum in Pilsen.