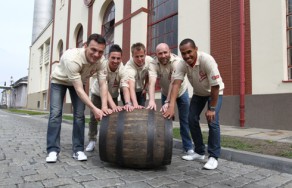 Czech team members and fans took up their roles in the Gambrinus brewing room responsibly. „Now, we are going to portion the hops from Žatec that gives our beer the right bitterness,“ master–brewer Homolka directed the ten members of the team, making it seem as if he was a captain of the soccer „eleven“ team. „Now, it is important to check the wort that underwent the double mashing,“ he continued, teaching those present about what characteristics the wort should have, such as colour and scent. „Our beer gets its typical characteristics during the several weeks of fermenting and maturing that take place in separate containers, as is typical for Czech beers of the Pilsen type. The last traditional step in the brewing room is the ringing of the bell that signalizes sending the batch out for fermentation,“ the master brewer said,  commenting on the last task of the soccer players and their fans.

„It was an interesting experience. Hopefully, we have not done anything wrong, thanks to the watchful eye of the experienced master-brewer, and fans will be able to enjoy the good Gambrinus that they are used to while watching our matches.“ Milan Petrželav jokingly said. „Hopefully, they will toast many of our goals and victories. The more reasons to lift the glass after the final whistle, the better,“ added David Lafata, who has an extraordinary shooting record from this year’s Gambrinus league.

„The Gambrinus brewed by the team members and their fans will be ready just before the European Championship. We are preparing a special edition of cans for it, and during the championship, this batch will be on tap at our pubs,“ master–brewer Homolka said and added, „We are in negotiations to ensure that our beer will be available in one of the pubs in Wroclaw, where our team will play its first round of matches. I  believe we will be able to ensure that our fans in Poland will have a  place to celebrate the victories of our team.“