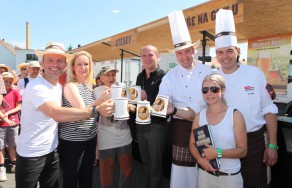 „This year, as well as before, beside the great Velké Popovice beer and a fine music programme, the visitors enjoyed the rich accompanying programme. The atmosphere was fantastic, and the attendance record–breaking. And that is also thanks to today’s beautiful, sunny weather. Interesting delicacies from the record-long grill in the Czech Republic were prepared to go with the crisp Velké Popovice beer. We would like to thank to all our fans especially for their abundant participation,“ Vladimír Vaněk, Velkopopovický Kozel Brand Manager summed up the successful beer festival that took place last Saturday in Velké Popovice.

Next to popular Velkopopovický Kozel 11°, the Day of Kozel jubilee also offered a traditional special to its visitors. This time, it was Honey Kozel. Both beers went great with the barbeque specialties. Those who could not take part at the Day of Kozel have the opportunity to taste Honey Kozel – the lager with a  well–balanced taste and a pleasant aroma of honey extract – in selected restaurants until approximately the end of June (the list of restaurants will be available at www.kozel.cz).

On the longest grill in the Czech Republic,  „The Boys in Action, “ Filip Sajler and Ondřej Slanina, prepared their own special delicacy according to an original recipe, barbeque pork neck marinated in Velké Popovice beer. The length of the grill, assembled from 1.25 metre long units into a record–breaking total of 21.67 metres, was verified by the Good Day Agency and recorded into the Czech Book of Records. Velké Popovice Mayor Martina Čermáková, brewery Manager Jaroslav Hacko, and Filip Sajler with Ondřej Slanina were present during the baptism ceremony of the record–long grill. The grill received the seal when master blacksmiths forged the coat of arms during their show. „It feels real good when you see how the result of your hard work brings joy and goodness to so many people,“ said Stanislav Šutka, the blacksmith, expressing his satisfaction with a job well–done.

During the day, the pleasant atmosphere of the festival was taken care of by several bands, including Hamlets, with frontman Dalibor Gondík, Waldemar Matuška, whose hits were once again alive thanks to the band Walda Gang, and Ondřej Hejma and his band, Yellow Dog, who made a final classic rock point with their concluding show. All who were present appreciated the fact that the bands did not stick just to their craft but also took part during the blacksmith show.