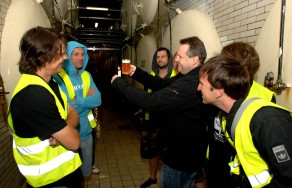 Chinaski band members went to the lager cellar together with the head brew–master and the master of the cellar. Together, they conducted the first review of the lager after it was laid down for maturing in the cellar. „It was very interesting to see beer that will be maturing for a few more weeks. We have tasted fully matured Radegast directly in the cellar as well, and it is clear that the visitors of the Radegast Day festival have something good to look forward to. I hope that our concert too will contribute to the fun atmosphere,“ Chinaski band lead singer Michal Malátný said.

Chinaski will play at Radegast Day on Saturday, September 15, from 9:45 p.m. Before them, there will be many other bands on the main stage such as No Name, Wohnout, Charlie Straight, and Mandrage. The programme in Nošovice starts at 11:00 a.m. Other entertainment will include manly contests, the finals of the consumer contest for 300,000 CZK (about 15,000 USD), and visitors’ tours of the brewery.

The 10th annual Radegast Day celebration will take place for the first time on the newly developed area next to the brewery, and the main stage will be directly inside the brewery. The new space has a much higher capacity and offers a much higher level of comfort to visitors while moving between the stages, additional parking, and much more. There will be many more refreshment stations and about one fourth more beer stands.