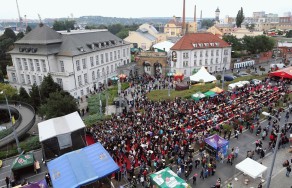 Twenty bands performed on the main stages, and seven finalists of the Urquell of Talents Competition played on the Boulevard, the cultural zone in the U Prazdroje Street, in front of the brewery at the Pilsner Fest this year. The colourful music programme boasted such bands as Mňága a Žďorp, Charlie Straight, performer Jiří Schmitzer, Žentour band, Koller Band, Tatabojs band, and many others.

And there were more attractions to make the visit even more pleasurable. Many visitors spent their time engaged in sport activities in the very popular G–city.

Hundreds of people learned about the rules of proper beer care. They had a chance to try drafting beer under the supervision of true master bartenders, the best of the Pilsner Urquell Master Bartenders.

The main attraction at this year’s Pilsner Fest was a signing by successful Olympic athletes from London, golden rower Miroslava Knapkova and modern pentathlete David Svoboda, who were giving away their signatures along with bronze shooter Adéla Sýkorova. Petr Koukal, badminton player and Czech flag bearer from London, added to the fun by playing against the visitors. To participate, people could donate money that, along with the profit from the auction of artefacts donated by some of the performing musicians, went to support the cause of Centre Umbrella.

Travel Through the History, four authentic Pilsen pubs from different time periods of the brewery’s existence, remained a successful milestone of the 170–year-long journey of Pilsner Urquell beer. The ‘30s style pub was the most popular.

On the crowded Boulevard, Komici s.r.o., performers from the popular comedy show “I”ll have it while standing” Iva Pazderková, Miloš Knor, and Daniel Čech made everybody laugh. The finals of the band and dance group categories of the Urquell of Talents competition took place on the double stage. Too Late band received the most votes and became the absolute winner. In the dance category, Afresh dance group seemed to draw most of the interest.

The relaxation zone K–lee–deck added to the pleasant atmosphere, this year’s novelty being a blood–alcohol level test and consultations with experts on responsible alcohol consumption.

Pilsner Fest marked a new Czech record in the holding of double beer glasses. Last year’s record was beaten by exactly one minute by Petr Němec with time of 11 minutes and 21 seconds.

The colder weather meant higher interest in visitors’ tours at Pilsner Urquell and Gambrinus. More than 1,500 saw both breweries.