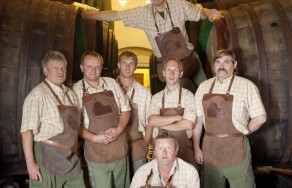 Plzeň brewery is one of the last that preserves the traditional production of wooden barrels and tubs and displays it to its visitors. „The award belongs to the whole team, without a question. Cooperage, and especially the work on lager tubs and barrels, is an orchestrated cooperation of the whole team of coopers where each one plays an important role. I am glad that our Pilsen brewery preserves this beautiful tradition and makes it possible for the public to see this art in live action. The last time was during the Pilsner Fest a week ago. The next opportunity to see the results of our work will be during the October celebration of the 170th anniversary of Pilsner Urquell lager,“ Josef Hrůza (who has worked as cooper for more than 40 years and now is the foreman of the coopers’ team at the Pilsen brewery) said after accepting the award.

The art of cooperage is being preserved at the Pilsen brewery for practical reasons as well. Thanks to the production and maintenance of fermenting tubs and lager oak barrels, a portion of our beer production has been conducted under the same unchanging conditions for the past 170 years. Thanks to the constant evaluation of the taste of beer thus produced and its comparison with the beer produced in modern devices, Plzeňský Prazdroj’s brew masters may guarantee the authentic taste of their beer.

Prazdroj employs seven coopers and since the masters do retire, the brewery is making sure to educate new coopers to fill the vacated positions. Cooper apprentices, usually highly skilful and experienced carpenters, will become master coopers after three years of schooling. Coppers take care of barrels and tubs in brewery cellars; they periodically maintain and repair existing equipment, make new lager barrels designated for the maturing of beer in the cellars and smaller ones made for transportation. Those barrels used to serve for the transporting of beer to pubs in days now gone. Today, they are used for special occasions. One such occasion is the 170th anniversary of Pilsner Urquell lager and Plzeňský Prazdroj brewery. Especially for this occasion, the coopers made special 170–litre barrels that will be used to serve unfiltered Pilsen beer, free to the public, on the Square of the Republic on October 5. Collectors and Pilsen Urquell beer fans will have the opportunity to buy small functional barrels in a gift shop on the courtyard of the Pilsen brewery, or in the newly opened company store, Pilsner Urquell Gallery, U Lužického semináře Street in Prague, Kampa.