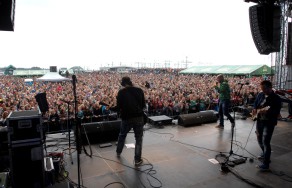 For the first time, the visitors of the Radegast Day came to the new area right next to the brewery. The entire area of the Nosovice brewery celebration was nearly full shortly after noon. The rich programme of the feast of the beer god Radegast attracted even more people so the total number of visitors this year was more than 30,000.

The success of the new area was confirmed by Martin Troup, Radegast Brand Manager: „A more spacious and comfortable area was needed for the Radegast Day because the number of visitors was constantly rising. It showed that it was a good solution. People were even closer to the brewery, and thanks to good distribution of the stages, they could move between them more comfortably. We will develop this idea even further in the years to come.“

Next to the rich music programme, people enjoyed themselves on the other six stages as well. They especially appreciated adrenaline events and had the chance to fly over the Radegast brewery in a chopper. The calming zone was a welcome novelty this year as well. There, the visitors could relax, learn about the responsible consumption of alcohol, and check their blood alcohol level using the Promile Info service to tell them how long it would take for them to be able to drive again.

Jan Žůrek from Bravantice will always remember the Radegast Day 2012 since it was he who won 300 000 CZK (about 15,000USD) in the finals of the truly manly competition “Get Ready for Service”.The programmes featuring the brew–master explaining the right way to care for beer were also very popular. People had a chance to learn how to draught beer correctly. Nearly 1,350 people went on a tour of the brewery and learned about how the very bitter Radegast beer is made.

The beer fans consumed 64,000 beers. The unfiltered lager brewed especially for this occasion was in the highest demand. It will be available in selected pubs until October 13. (The list of the pubs is available at www.radegast.cz).