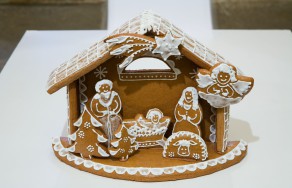 „We are pleased to see that our contest for the most beautiful gingerbread cookie is not only attended by the long–time experienced master bakers but by all generations. With their creations, many young contestants prove that this lovely tradition has been passed on,“ said Tereza Eisenreichová of Plzeňský Prazdroj. „Last year, 200 gingerbread creations were very tastefully crafted, including not only traditional Christmas and winter motifs, such as snowflakes, bells, houses, horses and the nativity scene, but also beer brewing motifs,“ she added.

To participate, one must simply bring their creation to the box office of the Museum of Beer Brewing no later than Tuesday, December 18th, which is the contest deadline. Even collectively produced creations are welcome. The contest will be divided into three categories: traditional Christmas gingerbread cookie, gingerbread creation, and children creation. Contestants will receive an invitation to the winner’s announcement event. The jury will select the winner, and he or she will receive an attractive prize. The gingerbread cookies will then be on display in the Museum of Beer Brewing until December 31st.

The contest for the best gingerbread cookies has attracted contestants for nearly a decade.

The jury has awarded two special prizes:
To Vlaďka Zapletalíková for her candleholder with a little church and fountain
To Libuše Kokošková for her creation called “Inferno”