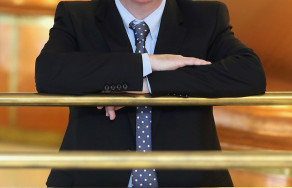 Before joining SABMiller, Diarmaid worked as a project manager of a food engineering team in the PM Group Company in Ireland and Great Britain. He started his career in the Bowen Water Technology Company in Ireland. Then he spent four years as a lecturer at University College Dublin.

Diarmaid De Búrca was born in Dublin. He got his education in Gaelic*. He holds a M.Eng from University College Dublin, Ireland, and an MBA from French institute INSEAD. His hobbies include jogging, meeting with friends, and travelling. Mr. Búrca speaks French, English and Gaelic, and thanks to his stay in South Africa, he is partially able to communicate in Afrikaans. He and his wife would very much like to learn some Czech during their stay in the country.

Mr. Búrca is replacing Julian Patton, who served in the position of technical director since May 2009.