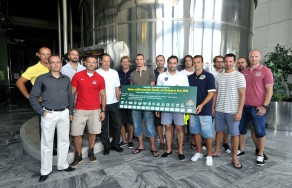 Today, the unfiltered beer is a traditional part of the Radegast Day. They brew it in Nošovice a month before the event. This year, Nošovice brew masters had 14 helpers. Under the watchful eye of the brewery’s master brewer they actively participated in the process of portioning the hops, which is an inseparable part of the beer brewing process. After that, they all signed a brewing document that is being issued with every batch.

The captain of the Třinec Steelmakers, Radek Bonk, travelled the shortest distance. „None of us would have ever thought that we would meet like this while brewing the beer. If only a bit possible, I will come to try at least one unfiltered in September. It is important to make sure that not only the beginning of the process, but the results as well were a success,“ Třinec’s Radek Bonk said smiling.

Hockey will get a lot of attention during the Radegast day too, since Radegast is the official partner of the hockey extraleague. It will be at that moment and time when the 21st annual Tipsport Hockey Extraleague season officially opens, witnessed by representatives of all 14 Extraleague clubs.

„To make the waiting for the beginning of the Extraleague more bearable for fans of well-bitter beer and hockey, we have prepared for them a special exhibition. There will a 120cm tall Cup for the Master of the hockey Extraleague, the President’s Cup for the winner of the basic part, and the second place cup displayed as a part of our exclusive Nošovice brewery tour since September 25,“ marketing manager of Radegast brand Karel Kraus said.

Unfiltered beer is brewed the same as Radegast Premium, and shares a similar bitterness and nice, sharp taste. During the final stages, however, filtration and pasteurization are skipped. It is known for its brewer’s yeast aroma and murkiness.

The Radegast Day will take place in Nošovice on Saturday, September 14th. The 11th annual fest will host famous Moravian bands and artists such as Kryštof, Buty, Ewa Farna, Citron and Mňága a Žďorp. Next to the traditional unfiltered lager visitors may look forward to Radegast Adrenalin Park, hockey zone, contests with prizes and tours of the brewery. Entrance is traditionally free.