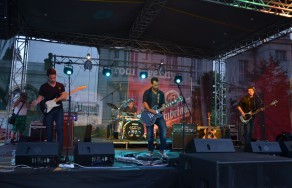 Pillow Fight is a well tuned band of musicians from Pilsen, playing a mixture of pop, rock and rock’n’roll. In 2010, the band experienced a rise in popularity with new members Jan Fencl (guitar and voice), Adam Hofmeister (bass), Ondřej Kopecký (drums), and Luděk Holý (voice and guitar; he is also the author of English texts. This year they are coming with their debut album “Starlight.” Its diverse track list is a map of the bands repertoire from the past 5 years. Since then they have, under their belts, 40 original songs and more than 200 concerts where they could be seen side by side with Xindla X, Michal Hrůza, Báry Zemanova, Charlie Straight, and other known names of the Czech music scene. Fans may look forward to the new album and in case of victory at the Urquell of Talents, to their performances at the October Pilsner Fest.

Advancing to the finals of the traditional Championship of Czech Republic in holding of double-steins, that will take place on October 5, belongs to Soňa Štěpánová. Next to secured participation in the finals, the happy winner took home with her a carton of Pilsner Urquell beer.

This Thursday you can look forward to Extra Band revival, a rock band of the second half of 1990s, and mainly to the last duel of bands between Different D.I.S.C.O. and Bags. Fans may pick the winner during the concert on site using the voting vouchers or during the next seven days online at www.pilsnerfest.cz.

*Pilsner Fest is a traditional celebration of Pilsen beer that will take place on the courtyard of the Pilsen brewery on October 5 this year. You can find more information about the festival of music and Pilsen Urquell beer at www.pilsnerfest.cz.