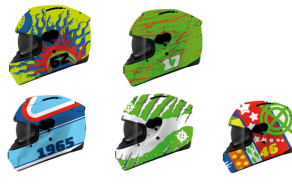 Voting will take place during the entire competition weekend at „Automotodrom“ by the advertisers of Birell.

„Birell is an ideal, refreshing, nonalcoholic beverage for active pastimes and bike rides are one example. Every biker likes to stand out among the others and so we have decided to give them an opportunity to win a helmet of their own design,“ said Luděk Baumruk, manager of Birell brand, the partner of Grand Prix Brno and Brno Automotodrom.

Thousands of people completed the application on Birell’s Facebook page They contributed more than 2500 helmet designs. Voters selected 25 of the most popular designs. The expert jury has selected the five best designs that will compete among visitors to the Grand Prix Brno and Facebook sites. The winner will be announced on Wednesday, August 28.