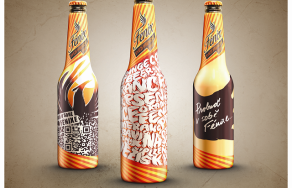 Vojtěch Staniš used the motif of the helmet used by the Czech motorcycle legend while circling the races in Czech Republic and around Europe. Dominant are a tricolor and the number 1965, which reminds us of the last and fifth title of Czech Champion that František Šťastný won.

The Birell Helmet contest took place during the Czech Republic Grand Pix in street motorcycle racing. Facebook users created nearly 3 thousand helmet designs. „Visitors to our Grand Prix and our Facebook profile selected the final five designs. Both designs received an equal number of votes, therefore we have decided to award the helmet to both authors. Nearly 10,000 people voted in the contest,“ Luděk Baumruk, marketing manager of Birellu brand, said. He added that the connection between Birel and motorcycles is logical: „Birell is an ideal refreshment for bike trips.“

Only one helmet may be displayed in the Restaurant Birell Paddock at Brno racetrack. The one created by Vojtěch Staniš was chosen by the executive director of Brno racetrack Ivana Ulmanová.