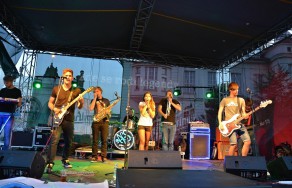 With the highest number of votes, The fans have selected the music band Bugsout of seven bands that made it to the finals of Urquell of Talents competition during the traditional series of concerts Summer in Prazdroj. The fans have decided during the public voting from September 2 to 16. The eight members formation from Strakonice has beaten equally qualified rivals Chai, Coctail… alá motejl, Isua, Frajara Putika, Fanfan, and Pillow Fight. They will receive free Pilsner Urquell beer for a year but mainly a chance to perform at Pilsen fest for honorarium of 20 thousand CZK (about 1.000 USD). The band Bags will play at 1:15pm at the lower arena and they will open the music portion of the Pilsner Fest program that is built to celebrate the brewing of the first batch of Pilsner Urquell beer on October 5.

Bags, the Strakonice group of eight musicians has played more than 150 concerts so far, they published 3 EPs, and one CD. Their fans know them from festivals and also as opening numbers for major bands such as Vypsaná fixa, Mandrage, and UDG. Their energetic pop-rock spiced up with electronics excited audience at Summer in Prazdroj festival, and now, they will have a chance to rich out to thousands of visitors of Pilsner Fest.

More info about the Pilsner Fest at www.pilsnerfest.cz.