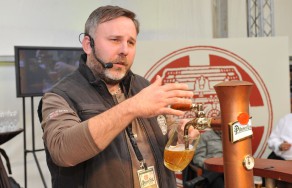 František Šťástka from the New York pub “Hospoda” won the title of best bartender in the world during the eighth annual prestigious competition Pilsner Urquell Master Bartender. As a prize he took with him a travelling cup – an exact copy of the cup used by Kaiser Franz Josef I – to taste the Pilsen lager. As a reminder of the competition he got a piece of handmade chain from a mashing pan of the brewing house; one of the symbols of the unique brewing procedure of Pilsen lager. After the ceremony, the winner took over and finished serving the unfiltered Pilsner Urquell from the oak barrel.

„I am convinced that the victory, in front of so many fans of our beer, right in the middle of the brewery’s courtyard on the day of the anniversary of the first batch, was imprinted onto František Šťástka’s heart, and that he will keep spreading its fame overseas because the beer cannot just be made of high-quality materials but also served and taken care of with love,“ said Václav Berka, senior marketing malt-master and chairman of the jury of Václav Berka.

All finalists had to prove their rich knowledge of Pilsner Urquell lager’s history, production and care, and present the Pilsen beer according to the high standards of the competition. Czech contestant Tomáš Hrnčíř from Prague’s “Lokálu U Bílé kuželky” at Malé Strana, with his victory in the national round, won a great name for his restaurant and today, in the world finals, won third place. Second place went to Giacomo Fogli from Italy.

A cultural presentation of each contestant was also part of the competition. The best bartenders were supported by legends of Czech sports: Olympic participant Petr Koukal, hockey player David Moravec, an Olympic winner from Nagano, and many others. The entertainment provided was American acrobatic rock ’n’ roll, Norwegian ballet, Korean fan dancing, Slovak shepherd’s pipe, and Polish Mazurka. The visitors had a chance to taste cheese from Holland and Italian pizza.

Pilsner Urquell Master Bartender is a worldwide competition in the serving of Pilsner Urquell beer. It is open to all ambitious bartenders who know not only the history and theory of the production of the first golden lager, but also the different techniques of serving beer and how to present the beer as the Pilsen original rightfully deserves.