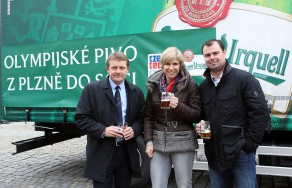 Gold Olympic medal holders Kateřina Neumannová, Jaroslav Špaček andMartin Doktor got together in the courtyard of the Pilsen brewery to toast to the success of the Czech team during the upcoming Winter Olympic Games. Along with Václav Berka, senior marketing brew master of Pilsner Urquell Comp., they raised their glasses before shipping the Pilsner Urquell beer made especially for Sochi. They also signed a symbolic Golden Barrel, which will be tapped on the opening day of the Czech House, and checked the shipment before its departure.

„We have shipped 120 barrels of beer, 5 tap stations with all the equipment, and a unique line of Olympic glasses for the Czech Olympic House in Sochi. The beer and the other equipment, all with special logos, ensure that the contents and the destination are known at first glance. In the end, the shipment will travel more than 2,100 kilometres,“ said Jan Kovář, national manager of sport sponsoring at Plzeňský Prazdroj Comp.

Pilsner Urquell beer has been a proud partner of the Czech Olympic team since 2002. „Pilsner Urquell will represent the Czech Republic for our 7th Olympic Games. During the Games in Salt Lake City (2002), Athens (2004), Turin (2006), Peking (2008), Vancouver (2010), and London (2012), visitors from all around the world awarded the craft of Pilsen malt-masters with the ‘highest scores.’ This fact is supported by the several hundred hectolitres of our beer that were consumed during those games,” stated Václav Berka, senior marketing brew master of Plzeňský Prazdroj, concluding, “I believe that by having our gold medal winning athletes ship the beer, it will bring luck to this year’s Czech athletes and we will be able to toast to golden successes in Sochi with golden lager from Pilsen, saying ‘Gold for Gold!’“