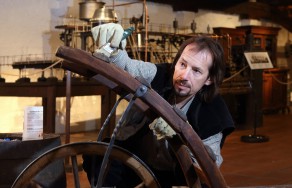 Beer Brewing Museum is opening its doors to the public again in February 2014. After a month of cleaning, dusting off fixed expositions and installing new artefacts, the Museum is ready to welcome its visitors once again. Newly organised and refreshed expositions are ready for those interested in the history of beer. Those will be available from February until the end of the year daily from 10 a.m. to 5 p.m. The collection of displayed artefacts was expanded by pieces collected during the general donation event that took place last year.

After a month of intense preparations, thorough checkup, installation of new artefacts and one completely new exhibition, the new season is ready to start.„Today, Beer Brewing Museum proudly displays a collection of nearly 70,000 artefacts. That was also one of the reasons why the preparation for the new season took several weeks, during which we were intensely dusting off and rearranging old and new pieces. The artefacts explain the history and traditions of beer brewing. We regularly change the artwork and some expositions so that even returning visitors find something new to admire here. We have added some pieces that we recently obtained. These are mainly artefacts closely connected with Pilsen breweries, such as beer glassware that we procured thanks to a general public collection event last year,“ explains Vendula Hnojská from the Beer Brewing Museum.

The authentic mediaeval house which is the home to the Museum also requires occasional conservation work on some selected artefacts. The Museum’s own art restorer Mr. Miroslav Hořánek worked on many of them himself. A large portion of the Museum tour was also freshly painted and newly marked to make the tour easier to navigate.

The new season will bring new exhibitions. The first is the exhibition of drawing and paintings by Pilsen artist Dana Raunerova called “Monochrome Retro with Colors in the End,” which will open on February 5. The exhibition will be available in the Museum until February 23. In April, the Museum will introduce a new exhibition of pictures by three generations of photographers from the Vaneš family. They documented life in Pilsen as well as happenings in the Plzeňský Prazdroj brewery. The second half of the year will bring an exhibition themed „The transportation of Pilsner Urquell beer.“

The Beer Brewing Museum in Pilsen safeguards the legend of beer and beer brewing. It is a unique institution that expertly collects artefacts and displays its depository. It has a home in the authentic space of the mediaeval “house with rights to brew beer.” The house was preserved in its original 15th century state. It has a mediaeval atmosphere and it uncovers the secrets of production, serving and consumption of beer from times long gone until present. Visitors of the Museum may see a late Gothic malt house with a well, a malt drying rack, a rolling room, an ice room, double-deck cellars and the old brewery taproom. They will learn how they brewed beer in ancient Mesopotamia and Egypt, when beer first appeared in Czech lands and history of the Pilsen beer.

More information about the Museum at www.prazdrojvisit.cz/cz/pivovarske-muzeum/.

Press contact of Plzeňský Prazdroj Kateřina Krásová is available to media at: