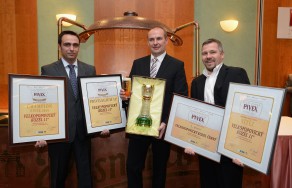 Prazdroj’s beers succeeded in a majority of categories in the prestigious competition Pivex – Beer of the Year 2014
The expert tasting competition in the beer-brewing field, Golden Cup Pivex – Beer of 2014, belonged without question to Velkopopovický Kozel 11°. Besides the top prize of Champion, it also won the special award Privilege 11 in the category of 11-degree beers and the highest award in the category of light lagers. Second place went to Radegast Premium beer.  Birell Lemon & Pomegranate occupied second and Birell Lime & Raspberry the third place in the category of non-alcoholic mixed drinks. Birell Light, Velkopopovický Kozel Dark and Gambrinus Juicy Citrus also placed in other categories. Eight beers in total from the portfolio of Plzeňský Prazdroj breweries placed in the competition and that is a record success as of today.

Prazdroj beers celebrated a success in nearly all main categories of the competition, which was a part of the gala event of beer brewers and malt makers of Czech Republic on Monday, February 24, in the convention hall Orea in the hotel Voroněž in Brno. „The absolute title of Champion for Velkopopovický Kozel 11° and its other victories in individual categories we see as an excellent outcome of the competition. However, we are happy for any award our beers win, including success in the non-alcoholic mixed beers category. The jury highly praised Birell Lemon & Pomegranate and Birell Lime & Raspberry,“ said Paolo Lanzarotti, general manager of Plzeňský Prazdroj, sharing his joy.