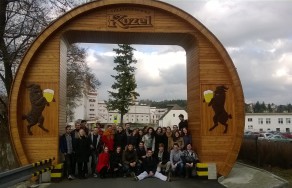 For the fourth year in a row, Plzeňský Prazdroj cooperated with CEMS to organise for its students a conference about social responsibility, which took place on February 27 and 28, 2014, in Velké Popovice. 38 participants, 11 of which were students from foreign schools, took part in the event that aimed to increase interest in the issue.

At the beginning of the conference, conducted in English, the director of internal relations and communications at Plzeňský Prazdroj, Drahomíra Mandíková, presented 10 priorities for the company’s sustainable development, as well as results from the past years, to Czech and foreign students. „We consider a life-long dialogue about CSR issues with students extremely important.  Mainly, we hope to make them excited about the idea that business activities are sustainable only if based on a responsible approach. The conference had a fabulous atmosphere full of high interest and questions. It filled us with a feeling that young people see a responsible approach to business activities as a key aspect,“ said Drahomíra Mandíková, director of internal relations and communications at Plzeňský Prazdroj.

Pavlína Kalousová, chair of the platform Business for Society, introduced a broad view of CSR issues at home considering the role of the state, non-profit organisations and companies during the Thursday afternoon programme. After the lunch in Kozlovna, Jaroslav Hocko, manager of the company, conducted a tour of the brewery and told participants about the history and the production of the traditional beer Velkopopovický Kozel. He also mentioned the geographical trademark of Czech beer, which guarantees the consumer a genuine, traditional Czech product made only from the highest quality materials. After that, the students learned about the functions of the grant programme Prazdroj to People, which supports regional projects. At the end, Dr. Jaroslav Šmídek, member of the board of Velké Popovice brewery, talked about general issues of CSR in Velké Popovice.

Friday’s series of talks included issues related to sustainable development: environmental issues and a tour of the water treatment plant, followed by responsible alcohol consumption issues and the norms of responsible communication at Plzeňský Prazdroj. The two-day conference was concluded by discussions of issues related to human rights, the pillar of sustainable development for the entire society.

CEMS – The Global Alliance in Management Education is an association of prestigious economic colleges and international companies. The main project of CEMS is the mutual continuous programme Master in International Management (CEMS MIM). Only one economic school in country may have the CEMS accreditation. In the Czech Republic, it is held by the College of Economy in Prague. The CE became a rightful member of CEMS in 1998.