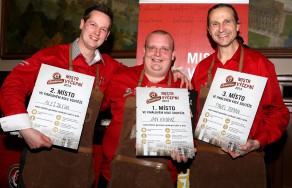 The proceeds of the charitable auction will go to the Umbrella Center.
Martina Sáblíkova, the fresh holder of two Olympic medals from Sochi, has launched and signed a collection of unique Olympic coasters in the Pilsner Urquell tent in Prague – Letna. This set was made for a charity auction of which proceeds will go to the Umbrella Center, and which will take place on March 12, at 2:00 pm at online portal Aukro.cz.

“I am very pleased that we can continue in our long-term tradition of supporting Umbrella Center with this charitable auction. I believe that thanks to the money from the auction we will support sports activities of Umbrella Center clients,” saidLukáš Novotný, brand manager of Pilsner Urquell. He added: “I would like to encourage the auctioneers with the fact that besides Martina’s signatures, they will also get an art set of Pilsner Urquell coasters that cannot be purchased anywhere and that exist only in very limited edition.”

Each one of the set of six coasters represents one Czech gold Olympic story. Each original story is connected with the location of the Olympic Games where it took place, and which was conquered by Czechs for a while. Pilsner Urquell is honouring all Olympic athletes with this collection of art pieces designed by artists from Grenoble, Sapporo, Nagano, Salt Lake City, Turin, and Vancouver, the places where we were golden. Martina also got an identical collection as a gift from Pilsner Urquell, general partner of Czech Olympic team, as a reminder of her golden story.