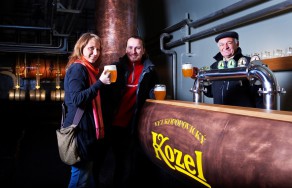 On Saturday, April 26, hundreds of those who enjoy the countryside around Velké Popovice and its honest, traditional Velké Popovice beer will participate at the 9th annual Walk through the Countryside of Baron Ringhoffer. Velké Popovice brewery is one of the stops of this 20,3 km (about 12.6 miles) long walk. For this year, there is a rich program prepared to accompany the participants. In the brewery, they will have a chance to enjoy a special tour of the brewery with a “wandering painter,” a christening of a new goat kid, and sculptures from the world champion in wood-carving and carpentry Martin Komárek. The traditional event is organized by the Micro-region Lada’s Country and Velké Popovice brewery, which is celebrating the 140th anniversary of its founding this year.

The start of the walk through the Countryside of Baron Ringhoffer is at the train station in Mirošovice at 9:30 am. Participants may take off on foot, on bicycles and now for the first time on scooters. Velké Popovice is the fourth stop of the learning tour exactly 8,2 km (5.1 miles) from the start. During the portion of the walk from 10 am to 4 pm, tours of the brewery will take place every half hour.

The director of the Visitors’ Center in Velké Popovice, Eva Kršňáková: “Right at noon, we will christen a goat kid, the offspring of the billy goat Olda, the mascot of the brewery. This will be followed by the uncovering of a new wooden sculpture of our billy goat, which was made by world champion wood-carver Martin Komárek using a chainsaw. The first special tour of the brewery led by a guide in the costume of a wandering painter starts at 1:00 pm.”

Legend says that a wandering French painter who came to Velké Popovice during his travels painted the first labels with a billy goat as a thank-you to Mr. Ringhoffer for his hospitality. Special tours with the wandering painter will take place in the brewery until the end of September at 1:00 pm only on holidays and weekends.

During the tours, visitors will learn more interesting facts about the history of the brewery, and on top of that, they will receive an original beer coin. They can take it home as a souvenir or they can exchange it in “Velkopopovická Kozlovna” pubs in the brewery or “Pod Lesem” in Velké Popovice for a small Velkopopovický Kozel Eleven beer (in Czech republic a small beer is 0.3 l and a beer is 0.5 l).

During the day of the walk, the stop at the brewery will also offer rich refreshment and the honest Velké Popovice Eleven beer. Moreover, the visitor in the best costume – the tourist dressed in the style of the Austro-Hungarian Empire are very welcome – will receive a case of Velkopopovický Kozel beer cans for the rest of the trip and a book about the history of the brewery called The Legend of Velké Popovice.

Other big attractions among the 10 stops of the walk will be the opening of the Ringhoffers family crypt in Kamenice. The crypt was built between the years 1887-1892 by architect Jiří Stibral and is tastefully positioned in the countryside on “Zaječí Vrch” (Rabbit’s Hill). The founder of the brewery in Velké Popovice, Baron František Ringhoffer (who did not live to see the brewery to open in 1874) loved the countryside and so it became the final resting place for him and his descendants.

The final stop of the Walk through the Countryside of Barona Ringhoffer is the traditional town of Kamenice, where travel movies will be screened and the band Neurol will play starting at 3 pm. From 5 pm, buses will leave from the final stop of the learning walk to the train station in Mirošovicích. More information can be found at www.kozel.cz and www.laduv-kraj.cz.