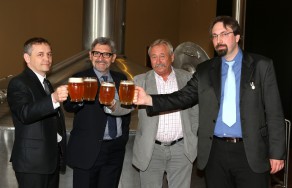 Plzeňský Prazdroj officials, and representatives of union organisations active in the company, sign a new union agreement in the historic brewing house of Velké Popovice brewery. It will take effect starting April 1, 2014, and will be valid for two years in all its provisions. Bohumír Matas, Radovan Otipka and Tomáš Vančura signed for the unions and Ivan Balogh, director of human resources department for the management of the company.

Both side agreed on a 2.5 percent pay increase based on an individual output starting July 1, 2014. According to similar criteria, both sides agreed to adjust the pay for 2015 at about a 1.5 percent increase. In case the inflation surpasses the mentioned percentage, Plzeňský Prazdroj is prepared to increase the pay for the second binding year of the union agreement up to 2.5 percent.

Next to the changes in pay policies, the employees of Plzeňský Prazdroj may look forward to more benefits affecting some selected departments working on multiple shifts. The other changes will affect safety and health issues in the work place, and health concerns of all employees.

“The collective bargaining was intense and constructive. I am glad that we came to an agreement and signed the optimal version acceptable for both parties. I believe that it will bring satisfaction and loyalty of our employees and result in stronger work ethics and a good atmosphere in all departments of Plzeňský Prazdroj,” said Ivan Balogh, director of human resources, commenting on the signing of the agreement.