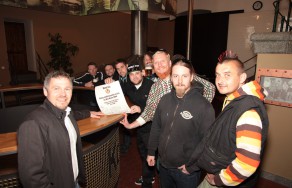 Velké Popovice brewery welcomed members of the Divokej Bill band, who came to make unfiltered lager from the Velké Popovice Kozel special to celebrate the 140th anniversary of the founding of the brewery. The festivities will take place on June 14 during the Day of Kozel, where the band will be the main star of the programme.

The band actively participated in the process of hopping, under the watchful eye of the marketing brew-master. “The boys tried the process of rationing hops that takes place in the brewing house. Hops are added in several servings during the cooking of hops, which is the final stage of brewing. The wort is cooked together with hops, which leads to the release of bitter and aromatic substances found in hops,” explained the marketing brew master of the Velké Popovice brewery, Vojtěch Homolka. In the end, they all signed the anniversary certificate of the batch.

Velkopopovický unfiltered lager contains higher levels of brewer’s yeast and other natural substances found in malt and hops. The lager is known for its natural yeast turbidity, the odour of brewer’s yeast, and expressive, full flavour. Filtration and pasteurization is omitted.

“We are looking forward to toasting with the unfiltered lager from our batch on the Day of Kozel, one month from now,” said founder and the leader of the Divokej Bill, Václav “Venda” Bláha, of their upcoming visit to the Velké Popovice brewing house. In addition to Divokej Bill, the bands Sto zvířat, Děda Mládek and Patrola Šlapeto will also toast with the unfiltered lager on the Day of Kozel. Patrola Šlapeto composed a song to  commemorate the 140th anniversary of the brewery.

Aside from the beer and good fun, visitors may look forward to traditional food that was common 140 years ago. Traditional crafts will be on display during the day. People will have the opportunity to learn about the history of the brewery on visitors tours. Other attractions include the original Billy-goat’s News and a trip on a steam train from Prague and Benešov to Velké Popovice.

The Day of Kozel takes place in the Velké Popovice brewery on Saturday, June 14, and starts at 11 a.m. Entrance is free.

Velké Popovice brewery celebrates the 140th anniversary of its founding this year. The history of the brewery and of the Velkopopovický Kozel started on May 10, 1874, when the buildings of the brewing house and of the malt house were officially approved and certified for use. The first batch of beer was brewed in Velké Popovice on December 15, 1874, and only a year later, 18,000 hl of beer was being brewed and sold there. Just a few short years after that, the brewery became the third largest in the country.

As part of the celebration, Velkopopovický Kozel has released limited edition of six bottles with retro labels. Those will be available for purchase until the end of June. 140 people bearing the last name Kozel or Kozlová will come to the brewery and will toast together with unfiltered lager, served from a 140 l barrel on the Day of Kozel.