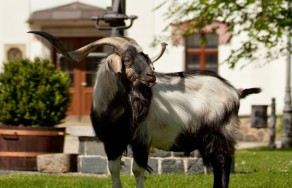 Velké Popovice brewery will celebrate its 140th anniversary this Saturday, June 14 on Kozel Day. Marketing Master Brewer of the Velké Popovice brewery Vojtěch Homolka will tap the 140l wooden anniversary barrel with unfiltered lager and will toast to the brewery with people named Kozel and Kozlová. Bands Divokej Bill, Patrola Šlapeto, Děda Mládek Illegal Band and Sto zvířat will perform in the brewery during the traditional celebration. Visitors can look forward to brewery tours, traditional Czech cuisine as they knew it 140 years ago, Billy-goat’s News and can even opt to make the trip by historic train. Entrance is free of charge.

The 22nd annual beer celebration of Kozel Day will be marked by honouring the 140th anniversary of the central Bohemian brewery established in Velké Popovice in 1874. Velké Popovice Brewery Director Jaroslav Hacko discusses the importance of the celebration, “The entire history of the Velké Popovice brewery is framed by a respect for tradition, good work, quality and the talent of local brewers. Since 1874, beer from Velké Popovice is the reward for both skill and hard work. Our employees and brewery proudly hold to these values, which have not waned for the past 140 years.”

At noon, attending fans of this traditional Czech beer will toast with the unfiltered Kozel lager from the 140l wooden anniversary barrel. The celebration offers particular welcome to those lucky enough to be named “Kozel” or “Kozlová.”Marketing Manager of Velkopopovický Kozel Luděk Baumruk notes, “We decided to organise an informal meeting of people who have the rare but honourable name “Kozel” right here in the brewery. Amongst the first respondents who accepted our invitation included the famed Czech conductor Václav Kozel.”

Music will colour the celebration for the entire day on-stage, with old Prague favourites being presented by the Patrola Šlapeto band, composers of the 140thanniversary song, and who will also launch their new CD on Kozel Day. The cheerful atmosphere will be also supported by other musical acts Sto zvířat and Děda Mládek Illegal Band. Headlining the stage is Divokej Bill, who is set to round out the celebration at 6:00 p.m. During the month of May, members of the band visited Velké Popovice under the supervision of Marketing Brew master Vojtěch Homolka and brewed one batch of the unfiltered lager especially for Kozel Day.

The very special, unfiltered 140th-anniversary lager contains higher values of natural essences found in malt and hops. Typical of brewing with natural yeast, the lager is tinged with a distinct murkiness, along with the unmistakable scent of brewers’ yeast and is punctuated with a strong, full taste. The anniversary beer menu will also contain Velkopopovický Kozel, Velkopopovický Kozel 11, and Velkopopovický Kozel Dark. The brewery is also preparing traditional Czech cuisine, which will be made available with the beer for the full program.

The celebrations are also set to include a beer academy, a beer-tapping show and many contests for great Kozel prises. This year, Kozel Day revellers can also enjoy traditional craft presentations and brewery tours that will run every 10 minutes, with the first starting at 9:30 a.m. and the last set for 4:30 p.m. The entrance fee is 50,- CZK (about 2.50 USD). The Billy-goat’s Gift Shop in the Visitors’ Centre of the brewery will offer assorted clothing, half-litre beer steins and other products made especially for the Kozel Day celebration.

The brewery will organise a historic steam-train route from Praha and Benešov on Kozel Day. The departure from Benešov is at 8:15 a.m. and from Main Station in Praha, at 10:05 a.m. One-way fare is 50,- CZK (about 2.50 USD) and will be sold on the train. The regular train connections to Strančice are set to run on their normal schedules. Bus transportation will be provided from Strančice to the brewery in Velké Popovice free of charge. Those with cars will find a spot at the high-capacity parking lot at the meadow behind the brewery’s pond. One-day parking passes are available for 50,- CZK.

Kozel Day’s official program kicks off on Saturday, June 14, at 11 a.m., with the brewery set to open to the public at 9 a.m. Dalibor Gondík is scheduled to serve as MC for the Kozel Day anniversary celebration. General entrance is free, and the complete Kozel Day program and accompanying transportation schedules are available at www.kozel.cz.

Voting for the most important artifacts from the brewery’s history, as determined by fans of Velkopopovický Kozel beer, is currently taking place at www.1874.kozel.cz. Participants have a chance to win beer for a year or historic coasters. The 14 artifacts receiving the most votes will be displayed in the brewery by the end of June, and their owners will win free Velkopopovický Kozel beer for an entire year.

People may send their best wishes to Velkopopovický Kozel to the aforementioned website and become a part of its history. Well-wishers can watch as their messages are printed live and placed in a wooden box stationed in the Visitors’ Centre of the Velké Popovice brewery.