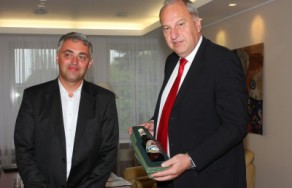 A goal that even much older breweries can only dream of was reached by a Nosovice Radegast after just 37.5 years of its existence. A bottle of Radegast Premium Light Lager, which came down from the bottling line in June of this year, carries the proud title “The Ten Billionth Beer in the History of the Radegast Brewery.” Today the manager of the Radegast Brewery, Ivo Kanak, handed over the commemorative bottle with the anniversary beer to Evzen Tosenovsky, the Moravian-Silesian Region Commissioner.

The largest brewery in Moravia waited for its ten billionth bottle of beer only 37.5 years. The long awaited moment came at the end of June, when the bottle of Light Premium Lager came down from the line. The brewery did not keep the anniversary beer to itself; this afternoon it was handed over to Evzen Tosenovsky the Moravian-Silesian Region Commissioner.

“Radegast Beer is an essential part and a symbol of our region. The anniversary bottle is therefore in the best hands with the commissioner, says Ivo Kanak, the manager of the Radegast Brewery.

If all ten billion bottles were filled at the same time and stacked in a line they would reach to the Moon and back. The same amount of beer would also cover four years of the beer consumption in the Czech Republic, granted that each citizen older than 18 years of age would drink one bottle of beer a day.

For a long time, Radegast has been the favourite beer in Moravia and the beer with the second highest sales in the Czech Republic. “Without the top quality of our beer and a strong relationship with its fans, we could not celebrate this success so soon,” said Kanak.

The history of the Radegast brewery started in December of 1970. The following year the brewery produced more than 500 thousand hl of beer and in 1988, for the first time, it passed the mark of 1 million hl per year. Since 2002 the production of the Nosovice brewery regularly reaches the mark of 2.2 million hl of beer each year.

More information will be provided by: