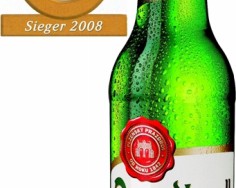 The VerkaufsHit is an award decided upon by experts, i.e. Getränke Zeitung magazine readers. The decision is based on confidence in a particular brand. This is the second time in a row that Pilsner Urquell has been awarded a prize within the imported beers category. No other product has ever managed to do so.

The marketing and distribution support the SABMiller Comp. granted to Pilsner Urquell helped the brand to grow in Germany by 23% on a year-to-year basis despite the fact that sales in Germany have been falling.

The PU growth has so far also continued in 2009. „Pilsner Urquell is still a hit not only with experts reading the Getränke magazine but also with the general consumer public. Consumers have been buying more Pilsner lager at the beginning of this year as well: we have recorded a slight sales growth despite the German economy facing some problems. At the turn of the year we were also able to increase the price by 6%,” adds Mr. Mareček, Plzeňský Prazdroj’s spokesperson.

Germany is Plzeňský Prazdroj‘s largest export market, followed by the United States and Slovakia. Thanks to its good distribution network, Pilsner Urquell premium lager can be purchased in 1,400 German restaurants. Packed, it is sold in 20,000 shops across German.