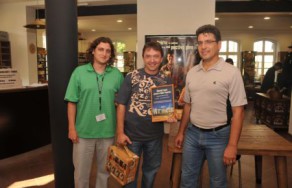 Since last spring, the traditional Czech beer brand Velkopopovický Kozel has been presenting itself in its home town in quite a novel way: visitors can now linger along the new sightseeing tour that includes a fully accessible visitor centre and a souvenir shop. A part of the new tour is the current boiling plant accompanied by an exhibition on the history of the brewery. Furthermore, it shows interested visitors the current brewing processes employed in the modern production of beer. Thus the new sightseeing tour interconnects the past with the present, and, since its opening, it could contribute to increased visitor numbers. In the year 2007 the 10,000th visitor came in December, in the last year in November, and this year it has already occurred in early September.

On Friday, September 11, 2009, the 10,000th visitor entered through the brewery gates.  It was Tibor Keresztesy, arriving with a travel group from Hungary. “I like Kozel at home in Budapest, too. But not without responsibility, as I work as a public transit bus driver,” smiles the awarded visitor. “We all liked the brewery tour very much, and I am glad to have seen the home town of my favourite beer. Tonight we will toast to it in Prague, of course with Kozel,” adds the brewery honour guest. As of Friday and for the rest of his life, he can visit the brewery in Velké Popovice for free.

Compared to the past years, there has been an increase in visitor numbers, especially from Hungary, Russia and Great Britain. “Whereas in the year 2008 we welcomed 11,132 visitors, this year we are confident to surpass the 13,000 bar. The praise we read in the visitors’ book confirms our hopes,” says Eva Kršňáková, manager of the visitor centre in the brewery in Velké Popovice. It would be a nice gift for the approaching 135th anniversary of the first beer brewing, which occurred in Popovice on December 15, 1874.

The season is still far from being over. On Saturday, September 19, from 12 p.m. through 5 p.m. the brewery opens its gates for the traditional OPEN HOUSE DAY. This year the excursion tour will show visitors a newly opened space featuring an innovative and interactive exposition on the key phases in the development of the brewery and the brand Velkopopovický Kozel. Another focus of the exposition is the entrepreneurial story of Baron Ringhoffer and his family, who created and shaped the brewery and the surrounding region in a decisive way. To round out the brewery tour, the new gift shop offers many souvenirs with beer thematic.
Open House Day, September 19, 2009