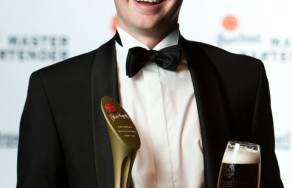 Now in its fourth year, the competition has reached new heights, with 4,000 bartenders from 17 countries competing for the coveted title. For the first time, the decision was taken to split the final between two cities. Bartenders first travelled to the home of the beer in Pilsen for testing, before transferring to the vibrant German capital of Berlin for the awards ceremony. Rasmus claimed his prize at a glamorous awards ceremony in the spectacular surroundings of the Deutsches Historisches Museum in the heart of the city.

The final stage of the competition saw the bartenders placed in front of a panel of beer experts for intensive interviews, before sitting an arduous written exam in the heart of the brewery in Pilsen. They were even tasked with demonstrating their pouring skills in front of an enthusiastic public in Berlin city centre.

Rasmus’s journey to Berlin is the culmination of a busy few years of studying, travelling and discovering his passion for bartending. He was more than thrilled to take home the international title: “I can’t begin to express how amazing winning this title is for me. All the bartenders here have so much passion and have worked so hard to get here. I can’t wait to spread some of this passion to my customers when I get back to Copenhagen.”

Second and third place went to Ivan Simonovic from Slovakia and Maria Abrams from Germany, who both gave sterling performances demonstrating in-depth knowledge of the brewing techniques that are unique to Pilsner Urquell and masterfully displaying the art of the perfect pour.

Vinod Giri, Global Brand Director for Pilsner Urquell, said: “The pure Pilsner from Pilsen deserves to be handled and served with care and dedication and all our bartenders have excelled themselves on that front. Each year, we are pleasantly surprised by the standards we see and remain committed to ensuring this professionalism is given the necessary rewards.”

Rasmus will now head off on a global victory tour, travelling to visit three of his fellow bartender finalists in their own countries to get behind the bar in their outlets, with his experiences documented along the way.