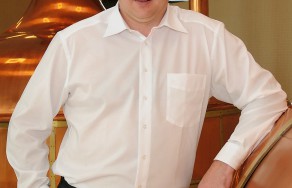 Tiarnán Ó hAimhirgín comes from Ireland. Prior to joining PPAS, he held the same position for the Pilsner Urquell brand in Germany. He was in this position for two years, during which he built Urquell sales from 182k hl to 210k hl.

In his role in Germany, he managed to make the PU brand the undisputed market leader in the German international beer segment. Pilsner Urquell was voted in both 2007 and 2008 by the German drinks industry as a Verkaufs HIT  – “Sales Hit – International beers”.

Tiarnán Ó hAimhirgín has a degree from Queens College in Belfast in German literature and Business Administration, and an MBA from the Johannes-Gutenberg University, Mainz, Germany.

His prior work experience encompasses various positions with Diageo and Guinness. He is fluent in English, Irish and German and speaks conversational Russian, Romanian and French.

Tiarnán is married; his wife, Marina, is Russian and they have three children.