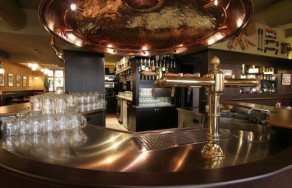 Today, after extensive renovation of the interior, a new restaurant in the Pilsner Urquell Original Restaurant chain opened in Prague, with an additional name, Kulaťák. Dejvice’s Vítězné Square, where the new restaurant is located, is better known to the locals as Kulaťák (a round space), due to its round layout.

The blueprints for the center of this important Prague landmark were drawn up in the 1920s, as a modern addition housing important buildings and institutions like the Ministry of Defense and the ČVUT (Czech Technical University in Prague).

Many major streets lead to the square, making it the natural center of Dejvice.  But the project was never fully realized, a horseshoe-shaped section of the square remaining undeveloped to this day. People near and far quickly adopted Kulaťák as a meeting place. The atmosphere is complemented by spectacular neoclassical buildings, with architecture in the Wagnerian tradition of the Vienna Academy.  But the Kulaťák always lacked a notable restaurant.  The location of the new Pilsner Urquell Original Restaurant itself was previously occupied by banks or offices.

“We decided to take advantage of the brand potential of the Pilsner Urquell brand by pairing Pilsner lager with excellent culinary art,” management said, adding: “Our patrons include diplomats from neighboring embassies, soldiers, office workers, students, friends and passers-by, whose lives are intertwined by the Kulaťák.”

According to management, the Pilsner Urquell Original Restaurant Kulaťák will be a true culinary center of Dejvice. However, the identities of the head chef and his team remain a closely-guarded secret. It is up to the individual to judge the food on its own merits.

The Pilsner Urquell Original Restaurant Kulaťák in Vítězné Square has a capacity of 130 people. On tap, you will find Pilsner Urquell lager, the dark Velkopopovický Kozel and the non-alcoholic beer, Birell. The extensive menu offers traditional Czech specialties which go well with beer, as well as selected modern dishes, all made from top quality ingredients. Open daily from 11.00 am until 12 am.

The original concept for the Plzeňský Prazdroj, a. s., is based in the marketing potential of the Pilsner Urquell brand and in the unique, unified interior of the restaurants.

A major feature that ties the restaurants together is their distinctive taps with copper caps (reminiscent of the caps from beer boiling pots), situated directly across from the exit. Stylish wooden furniture, wall paneling, interior finishes and these original taps create a unique atmosphere. The artwork, including paintings, period photographs, certificates, posters and artifacts borrowed or copied from the Beer Museum in Plzeň, also adds to the decor, showcasing the Czech Republic’s rich history of beer brewing as well as the popularity of the Pilsner Urquell brand.