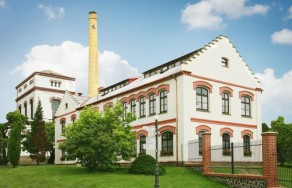 Over the past year, the entire brewery has undergone renovations. The company has invested in improved equipment, and the reconstruction of the buildings that make up the brewery’s infrastructure. “We concentrated primarily on the new visitor tour, which includes access to a new Visitors’ Center and a Kozel store,” said Eva Kršňáková, manager of the Visitors’ Center. “The company also made improvements to the brewery’s courtyard, and to the landscaping of the surrounding areas. And this year, the interactive visitor tour attracted a record 14,000 tourists from the Czech Republic and abroad.” Also noteworthy is the increase in Russian-speaking tourists. In Russia, Velkopopovický Kozel is the highest-selling foreign-brewed beer.

We plan to open an original restaurant called Kozlovna next to the brewery in the near future. “We are also planning to work more closely with the town of Velké Popovice and with the Ladův Kraj association in an attempt to attract more tourists to the entire region,” added new brewery manager, Jaroslav Hacko.

The Velkopopovický brewery was established in the 1880s by Baron František Ringhoffer. Velké Popovice was chosen as because it was conveniently located near a formal imperial road between Prague and Vienna, and because of the exceptionally high quality of the nearby spring water. Water is used in beer production, and ever today the brewery gets its water from the forests surrounding Velké Popovice.