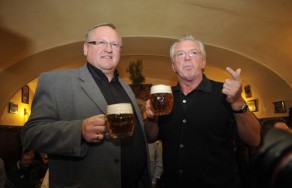 “Autograph signing is another event in a series of events for fans of the Ostrava club. In this season, fans have already been able to go for a beer with the players, see promotions of the team during games at home, and even partake in the ‘Become a player of the Vítkovice Steel Hockey Club’ competition,” says Pavel Kmínek, manager of the Radegast brand, who is organizing the event at the Futurum.