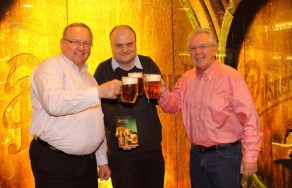 Table hockey is the most popular pastime of fans of the fastest game on earth. The captain of the Orlov hockey team, Martin Potočný, concurs: “I have a table hockey game at home and I sometimes play it with my friends. It’s always a lot of fun.”

The Radegast Cup is a competition which in terms of size has no competition in the Czech Republic. “A hundred first-round games will take place at various places around Moravia. Winners of these rounds will then meet in 10 semifinal matches and it all will escalate in the finals. 3,200 players can participate,” says the manager of the Radegast brand, Pavel Kmínek, clarifying the magnitude of this competition.

The best player will be given a trip to the world championship in ice hockey. Dates when the matches are held and rules are available at www.radegast.cz/hokej.

“The Radegast Cup is part of the Radegast supports Moravian hockey concept, and it takes place in Moravian pubs and restaurants which serve Radegast beer,” adds P. Kmínek.