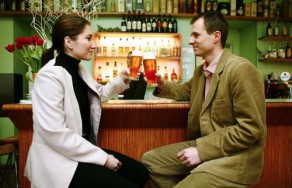 “Radegast is real beer for real men and that is why it supports hockey as part of the Moravian hockey concept. I am certain that fans of the Olomouc team, who sit right by the ice, are first in the Czech Republic if not around the world to do so,” said manager of the Radegast brand, Pavel Kmínek.

The Radegast pub by the ice isn’t missing anything that any good pub would have. Customers enjoy correctly chilled beer, roast pig’s knee and steak tartar. Beer is served by a friendly female bartender. But instead of watching the game on TV or on a screen, customers are watching the game live, from behind the Plexiglas.

“Our goal is to attract more fans to the arena, to get the best possible atmosphere. A pub, which Radegast set up right next to the ice, is an idea that will definitely attract attention,” said manager of the HC Olomouc, Helena Spurná.