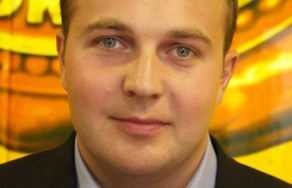 “I was born in Plzeň and my heart beats for our lager. I consider going to Scandinavia, where we’ve had great success with Gambrinus and with Velkopopovický Kozel, and fighting for Pilsner Urquell as a challenge. In total, more than 700 thousand hectolitres of our beer are drunk in Northern Europe and in the future I will work on the further establishment of an excellent name for our beers in this region,” says Luděk Kraus.

In his former position as a manager of Corporate Relations and External and Internal Communication of Plzeňský Prazdroj, Luděk Kraus moved forward remarkably, especially in the area of corporate responsibility. This includes, for example, the launch of the Internet site napivosrozumem.cz (consume beer wisely) and the increase in use of the Promile.INFO service. One of his responsibilities was also the representation of SABMiller Europe in terms of European Relations in the worldwide association of brewers, Brewers of Europe.

Luděk Kraus graduated from the Faculty of Business Administration at the University of Economics in Prague. He is also a graduate of the Exchange MBA programme, University of California, Los Angeles (UCLA). After graduation, in 1999, he worked for two years for the European Commission and EU Affairs, a consultancy in Brussels and in London. He specialised in the regulation of advertisements and in e-commerce. After his return to the Czech Republic, in 2001, he worked as Executive Director of the Association of PR Agencies. He has been working at Plzeňský Prazdroj since 2003.

He is single; he speaks Czech, English, a little French and Russian. In his free time he enjoys flying. Among his biggest flying adventures would be flying all over Europe, also beyond the North Pole and a course in flying acrobatics. His hobbies also include fishing, beer from Plzeň, ice hockey and relaxing.

The successor for the position of Manager of Corporate Relations and Communications will be announced soon.