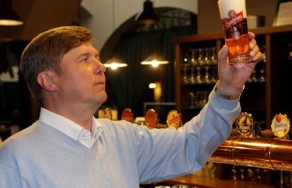 “In 2008, we received in this international competition an award for Gambrinus Premium and in 2009, the award for Excellence,” says senior Gambrinus brewer, Jan Hlaváček. “We are proud that this year three varieties of our Gambrinus were represented: Premium, Excelent and our flagship, Gambrinus 10° Světlý (light). It is clear that Czech beer not only has a great name around the world, but also scores very well in blind tests with its unique, full flavor and its aroma of hops, which is typical of Czech beer,” adds Hlaváček.

The Australian International Beer Awards, which were established in 1993, are every year gaining in popularity. They are the third biggest professional beer competition in the world. Awards are given only to beers that meet a  combination of strict quality parameters, especially balanced flavors and overall look. In cooperation with the University of Ballart, it works with the Portfolio of Gambrinus, which received awards from the Royal Agricultural Society of Victoria. This year there were 20 categories.