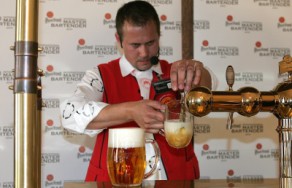 There were more than 1170 types of beer registered for the competition (495 international and 675 Australian beers) in fifteen categories. Thirty judges, which included three ladies, tasted and evaluated beer for over two weeks.

“The fact that three out of four of our beers received medals speaks of the quality and balanced flavour of Velkopopovický beers. This fact is also supported by bronze medals from 2008 and 2009, when Velkopopovický Kozel Medium received this medal in the category of European-type beers. Behind all of these successes is the hard work of all of the people from the brewery and the first-class ingredients that we use in the brewing process,” as the senior brewer of Velkopopovický Kozel, Jiří Fusek, explained.

The Australian International Beer Awards competition took place for the first time in 1993 when 30 breweries from Australia and New Zealand competed for medals. This year included a category of gluten-free beer, which did not have a winner. The absolute winner in the competition, the beer with most points, was a brave, small brewery from Grimstad in Norway for their beer Nøgne Ø.