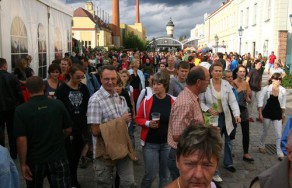 Pilsner Fest 2010 was officially opened on Friday evening by Pilsen Mayor Pavel Rödl and the Managing Director of Plzeňský Prazdroj Douglas Brodman. The opening ceremonies culminated with a communal toast, a record 5,331 admirers of traditional Pilsen brands making a toast at the same time, in the same place. It broke the previous record set 7 years ago.

Visitors were treated to a packed music program, with 25 bands playing on the stages of Pilsner Urquell and Gambrinus.

On Saturday at 10:00 PM, the gaze of all turned skyward to witness an incredible fireworks display.

Visitors at the Fest also enjoyed the brewery coopers’ craft, live statues and a bartender show. Also of interest were the signature event of our current and former football players and the announcement of the winners of the student essay competition on the theme “The true richness lies within”.

Pilsner Fest is a festival in honor of the established Pilsen brands Pilsner Urquell and Gambrinus. In addition to their traditional varieties, the brewmasters of both brands prepared an unfiltered variety for this year’s event. The bartenders had their hands full with 163 taps.

Pilsner Fest was also training day! Visitors had the opportunity to pour draft beer under the expert supervision of the Czech winners of the Master Bartender competition, led by defending national champion Lukáš Svoboda, who came here to prepare for the world championships. The appeal of this event was evident by the fact that the stand with our bartending champions was surrounded by people the whole time.

“Pilsner Fest was absolutely amazing… Fantastic program, excellent food and beer without having to stand in line, and yet the place was completely packed. Everybody had a great time, I was excited, it was great fun,” says Libor Vainer of Lochotín.

“This year we put great emphasis on the music and accompanying programs. We’re happy that this year’s Pilsner Fest outdid all our expectations and we would like to thank everybody who came. I think our entertainment program was successful and the atmosphere at the brewery was friendly, the way it should be with beer.” That was the opinion of Pilsner Fest from Karel Kraus, who is responsible for Pilsner Urquell marketing.

Tours of Pilsner Urquell, Gambrinus and the Brewery Museum

More than 2,200 people took the opportunity of Pilsner Fest to make a sightseeing tour of the Pilsner Urquell brewery and the cooper’s shop.

There was likewise great interest shown in a newly launched tour of the Gambrinus brewery, enjoyed by nearly 500 fans of this brand.

Other attractions were the Pilsen Historical Underground and Brewery Museum, which offered short theatrical performances to liven up the tours. Approximately 550 people took advantage of this chance to become acquainted with the history of the brewery.

As always, members of the nonprofit organization Sananim, providers of the service Promile.INFO, were on hand at Pilsner Fest. The service informs those who have had alcohol after what time they can get behind the wheel again. Moreover, there were alcohol testers available at the festival so that visitors could see for themselves whether it was all right to get behind the wheel or not.

More information about the event, including our photo gallery, can be found at www.pilsnerfest.cz.