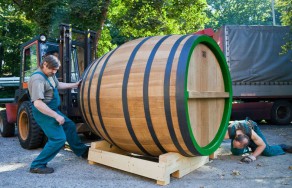 The keg, made from eight-year-old wood, weighs approximately 600 kilograms. Its diameter is 180 centimeters, and it can hold close to 27 hectoliters of beer. “In the language of beer-cellar masters, it is a ‘salt,’ a keg that is placed in the top row in cellars, while the kegs in the bottom rows can hold up to 40 hectoliters. We spent about 500 hours of labor making this keg,” said Josef Hrůza, head of the keg makers group at Plzeňský Prazdroj. The Plzeň brewery is one of the last places in Europe where this traditional craft is still practiced and developed.

Today the keg left the brewery in Plzeň and will reach Stockholm in two days. The tanker that will fill the keg leaves the gates of the brewery this Friday filled with Pilsner Urquell lager. In the meantime, the keg will be placed in a chilled showcase at the Pilsner Urquell booth at the Stockholm Beer & Whiskey Festival, which starts on September 30th. The Festival, with nearly 25,000 visitors, is one of the largest beer festivals in the world and rivals such events as Oktoberfest in Munich and the Beer Festival in London.

Festival visitors will be able to savor Pilsner Urquell from an original keg from Plzeň until all 5,400 beers held in the keg have been drunk. However, there are also classic Pilsner Urquell taps and standard rustproof kegs as backup. As the main host and beer specialist, senior business brewer from Plzeňský Prazdroj, Václav Berka, will give a presentation on how to pair Pilsner Urquell beer with selected meals. At the trade fair, the Plzeň booth will be the host of the national round of Pilsner Urquell Master Bartender, the fifth annual international bartender competition. The winner will continue on to the international finals in the Czech Republic.

Pilsner Urquell has long been popular in Sweden, and a quarter of beer consumers in Sweden regularly drink the lager from Plzeň. Furthermore, in May 2009 the third largest city in Sweden, Malmö, opened the first restaurant from the Pilsner Urquell Original Restaurant (PUOR) concept, which has since become a center stage for beer drinkers from Malmö. Pilsner Urquell is served in approximately 100 Swedish restaurants and can be purchased from practically all authorized stores. “In a recent poll in one of the most respected Swedish dailies, Göteborgs-Posten, Pilsner Urquell was voted Sweden’s best beer of the summer,” said Robert Lobovský, international trade marketing manager of the Pilsner Urquell brand from the export division of Plzeňský Prazdroj.