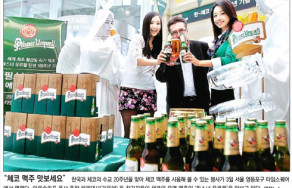 Increasing popularity of Pilsner Urquell led to the organization of the Pilsner Urquell Fest in South Korea’s capital city, Seoul, during which (besides Pilsner Urquell and the original festival, Pilsner Fest) Pilsner–type Czech beer was introduced as a specialty with its own special characteristics. For this reason, the Czech Embassy in South Korea took a big part in preparing for this important event.

In South Korea the legal drinking age is 19. Per year, 37 liters of beer are drunk here per person, and local brands dominate the market with a  share of approximately 97 percent. For now, the consumption of imported beers has a share of 3 percent, but interest in them is constantly increasing. That is why Plzeňský Prazdroj started to export its dark Velkopopovický Kozel five months ago. It received very positive feedback from South Koreans, which is also reflected in an increase in sales.

Up until now, Plzeňský Prazdroj has exported its Pilsner Urquell to Korea strictly in bottles of 0.33 liters. „Keeping in mind the growing interest in Pilsner beer, we are now considering supplying 0.5-liter cans and beer on tap in rustproof kegs,“ summarizes Karel Kraus, senior brand manager of the Pilsner Urquell brand.