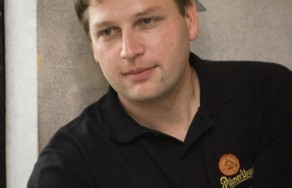 „One of my main tasks is going to be building a unified look for the Pilsner Urquell brand in all world markets,“ says Robert Lobovský. „I will focus on developing international programs to help develop the brand, such as reward programs, education of partners about the history and about how to properly care for the Plzeň lager, and other activities which strengthen the name of the lager and promote its quality around the world. I would like to increase brand awareness and to increase the number of people who have tried, personally consumed, the beer from Plzeň.“

Robert Lobovský has been working at Plzeňský Prazdroj since 2003. After one year in Human Resources, he moved to export as Manger of International Business Development. For two years, he was in charge of Eastern Europe and the Middle East and the following three years he was in charge of Northern Europe. Since fall 2009, he has been in charge of International Marketing for the Pilsner Urquell brand, taking care of all European countries in which SABMiller breweries are represented.

Robert Lobovský was born in Plzeň and he is a true patriot. At the age of 10, he emigrated with his parents to Australia, returning to the Czech Republic 16 years later. He is a graduate of Victoria University of Technology (Diploma of Hospitality Management).

He is married, has a four year old son and speaks Czech and English. His favorite pastime is spending time with his family. Some of his hobbies also include sports (tennis, squash, cycling) and photography.