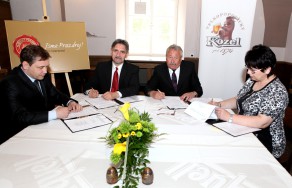 The agreement details pay increases for the next three years, where some employees can already look forward to an increase of up to 3%, based on work performance. The new collective agreement furthermore guarantees increases in salaries in the variable portion of earnings, even in the next two years, when pay rates will be increased twice, by 1% each time, for a majority of employees. The variable portion of earnings, which rewards good job performance, will also reflect team results which influence the management of the company.

Employees keep the right to receive yearly benefits up to 17 thousand Kč (1,033.20 USD). Of course, beer from breweries owned by Plzeňský Prazdroj is among the favourite benefits. Employees receive a beer gift certificate in the value of 2,500 Kč (151.90 USD) as well as beer for employees when they go on vacation. Also, the employer usually gives the employees beer which goes beyond the scope of the collective agreement when celebrating great achievements at Czech or international tasting competitions or for Christmas.

Among other benefits are yearly contribution to supplementary retirement insurance up to 6,000 Kč (364,70 USD) or tickets for sight–seeing tours of breweries owned by Plzeňský Prazdroj. Physical and mental relaxation after work is bolstered by gift cards to cultural and sporting events. This year, employees will receive gift certificates in the value of up to 4,700 Kč (285.7 USD). Employees working in high risk areas will additionally receive a sum of 1,500 Kč (79 USD) for recreation. The employer will also increase its contribution to meals by 4 Kč (0.24 USD) per meal.

Employees who have been working for Prazdroj for a long time will once again receive rewards for loyalty. Five–year loyalty will be rewarded by more than 5,000 Kč (303.90 USD), while during the next round of (five year) anniversaries, employees can receive a total value of 25,000 Kč (1,519.50 USD), including non–monetary rewards.

Bohumír Matas, President of the Trade Union of Plzeňský Prazdroj:
„Negotiation over the wording of this year’s collective agreement was difficult, since the employer wanted to reflect the negative development in sales during the past two years in the salaries. We were able to keep the same base salaries which will definitely add to retaining social securities. One cannot overlook the importance of securing further increases in salaries during the next three years, based on the performance of individual teams in the company.“

Ivan Balogh, Director of Corporate Relations and Human Resources:
„We would like to thank our partners for their cooperation during the negotiation of the collective agreement. I believe that we bring good news to our employees, since we are able to increase the variable portion of their salaries in spite the negative development of the Czech beer market. Plzeňský Prazdroj, as a good employer who appreciates the work done by its associates, finds that their satisfaction is extremely important to us.“