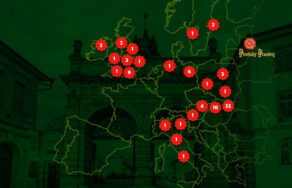 Admirers of the premium Pilsner Urquell from the tank can enjoy the beer in tank pubs outside the Czech Republic as well. A total of 88 tank pubs and restaurants offering Pilsen’s premium lager are now available in nine European countries. “More tank pubs will be opened in the following months,” says Tomáš Mráz, Sales Director of Plzeňský Prazdroj.

Slovakia operates 42 tank pubs that offer Pilsner Urquell lager, the highest number in abroad. Customers can enjoy lager from the tank in Bratislava as well as in other cities, such as Košice, Žilina, Poprad, Nitra, Trnava, Trenčín, Prešov, and Piešťany.

The second ranking country is the United Kingdom with 17 tank pubs; two are currently open in Ireland. Pilsner Urquell from the tank is available especially in London, which has nine such establishments. Others are in Manchester, Liverpool, Leeds and Edinburgh; Ireland’s two tank pubs are located in Dublin. Germany has seven tank outlets in Berlin and Hamburg; five are open in Austria (Vienna and Graz) and Poland (Warsaw, Wroclaw and Krakow). Others are in Italy, Sweden, and Hungary.

The quality of beer in abroad tank outlets in is monitored by a team of Pilsen’s brewmasters. Václav Berka, Senior Trade Brewmaster of Plzeňský Prazdroj, has recently returned from an inspection trip abroad. “The British are accustomed primarily to top-fermented beers that are offered with nearly no foam. Nonetheless, they are searching for new, unusual tastes, and our lager, tapped in a single pour with rich, wet foam, is becoming more and more popular. Our tank pubs are almost constantly packed with guests; this also holds in abroad,” Václav Berka says.

Jitka Němečková, Spokesperson of Plzeňský Prazdroj, is available to the media at these contacts:
Cell: +420 731 193 191
E-mail:

Notes for the editors:
With total sales of almost 11 million hectolitres in 2016 (including licensed production abroad) and exports to more than 50 countries around the world, Plzeňský Prazdroj, a.s. is a major beer producer in the region and the largest exporter of Czech beer.
For its long-term contribution to promoting corporate social responsibility in the Czech Republic, Plzeňský Prazdroj, a.s. was awarded the Gold Certificate in the 2017 TOP Responsible Company competition. The company received the award also in 2016. This year, Plzeňský Prazdroj received the Gold Certificate also for Responsible Reporting and Diversity Strategy.