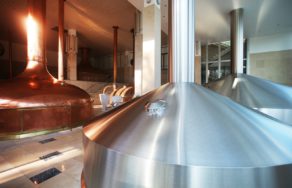 Coming into the main beer season, the brewery in Velké Popovice has expanded capacity for making its Kozel brand by almost one-fifth, to 49,000 hectolitres per week or 2 million hl per year, in response to growing popularity from consumers both in the Czech Republic and on international markets, where Kozel is the best-selling of all Czech beer brands.

The total investment in expanding the Velké Popovice capacity amounted to CZK 91 million, of which 63 million went into the Brewhouse and the rest into the warehousing facility. “We decided to go for this investment last March, the actual works commenced in August and carried on through the winter. Thanks to which it’s all done now at the start of the key peak season and we are all ready to meet the beer demand for Kozel in full,“ said Petr Kofroň, Velké Popovice Brewery Manager. The new brewing equipment allows them to produce as many as twelve brews a day in three mash tuns, while preserving the original process for making Kozel beer. “We brew our beer to the highest-quality standards, according to traditional recipes and using the same procedures as in the era of Baron Franz Ringhoffer, the founder of our brewery,” Petr Kofroň explained.

The investment also included a new lauter tun and a mash kettle made of high-grade stainless steel, the size of the tun is 8.5 m in diameter and weighs more than 30 tons. The tun and the kettle were delivered to the extended Brewhouse in early March, the installation was finished in April and the first brews were trialled in May. After the successful trials, the brewery is now about to run at full operation. In addition to the Brewhouse, a new warehouse has been constructed, enabling the brewery to ensure the finished beer is stored according to high-quality requirements before it is distributed to consumers.

The most complicated task in this project was the installation of the new lauter tun. “Setting the tun in place was almost like a task for a clockmaker, but here, to be done by crane operators. All of us were almost breathless watching the tun being laid down and set, we were in great suspense because when you set an 8.5m diameter vessel, you only have a 5 millimetre allowance on each side,” described Tomáš Kosmák, the capital project manager responsible for the capacity expansion at Velké Popovice.

By expanding its production capability, the brewery responds to the growing popularity of Kozel beer on the local but especially international markets. Last year, exports from Velké Popovice increased by 12 percent and the volumes brewed under licence (mainly in Russia, Slovakia and Kazakhstan) also grew by 12 percent versus the prior year. Among the most popular products made by the brewery are Kozel pale lager and Kozel Dark, which is one the the best-selling of all dark beers around the globe, particularly fast growing in Asian markets. In the Czech Republic, Kozel is anchoring its position as the second most popular brand, behind only the long-term No.1, Pilsner Urquell lager. The popularity of Kozel is witnessing the fastest growth of all local beer brands.

For its expanded capacity, the brewery has secured sufficient supplies of fine-quality ingredients from both Bohemia and Moravia, especially barley and hops. “We have established long-term relations with local suppliers, thanks to which steady deliveries of raw materials in the required volumes are guaranteed. We informed our partners of the investment in advance,” Petr Kofroň added.

The first brew was made at Velké Popovice on 15 December 1874. One year later, the brewery put out (made and sold) 18,000 hectolitres of beer. In only a couple of years, the brewery became the third largest producer of beer in the country, gaining renown especially for its strong dark beer. The Velké Popovice brewery is part of the Plzeňský Prazdroj, a.s. company.
Visitors to the brewery can look forward to an interesting and fun tour that will take them through the past and present of the brewery and its surrounding sites. The tour also includes a tasting of beer in the lagering cellar and meeting the brewery’s live mascot – the billy goat (or ‘kozel’ in Czech) Olda.
The Kozel Souvenir Shop on the grounds of the brewery has an attractive selection of beer-themed items.
Also situated on the brewery grounds is the Velkopopovická Kozlovna Restaurant, offering Czech cuisine and a wide range of draught beers to enjoy – especially great Velkopopovický Kozel 11° (eleven-degree beer) drawn directly from a beer tank.