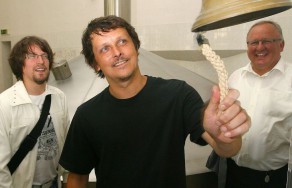 At the end of August, Prazdroj brewery will open its gates and its taps to festival visitors, so they can fully enjoy classic as well as traditionally very popular non–filtered versions of Pilsner Urquell and Gambrinus beers. Last year, a record–breaking 50,000 visitors came to Pilsner Fest, where they consumed more than 150,000 beers. Plzeň’s  brewers are therefore making sure that they are perfectly prepared for their festival.

First, members of the band Chinaski, together with two Plzeň natives, actor Pavel Nový and Olympic athlete Michal Michalík, and Plzeň vice–mayor Eva Herinková, visited the Pilsner Urquell brewhouse. Pavel Nový and pentathlon athletes Michal Michalík  and David Svoboda had particular interest in thoroughly examining the colour and the clarity of the young beer. The guests tasted samples from the brew batch designated for consumption at Pilsner Fest. Then, they all moved to the Gambrinus brewhouse. There they checked the brew batch of Gambrinus beer. Members of the band concluded their visit by ringing the bell traditionally used to announce the end of the beer–brewing process.

„All of us in the band are Prazdroj fans, and during our concerts, we basically do not drink anything else. Therefore, we were very pleased to receive an invitation to visit the Plzeň brewery, and especially so when we were asked to fulfill such an important and responsible task. It is important that during the concert the audience enjoys the music and the beer equally. We are looking forward to sharing some fun times with everybody at Pilsner Fest. At the festival, we will perform numbers we played throughout the history of our band, and our fans can look forward to our biggest hits,“ was the message to music and beer fans from members of the band Chinaski.

The beer has been brewed today following a tradition which goes all the way back to the time of the brewery’s first brewmaster, Josef Groll. He brewed the first batch on October 5th, 1842, and, according to records, the beer was first drawn five and a half weeks later, during the Saint–Martin’s Annual Fair. „We still use the same ingredients, and follow traditional beer brewing, fermenting, and maturation processes. Therefore, we have brewed the beer today, so that by the time of the festival, it will have matured and will posses all of the characteristics beer lovers cherish and love about it so much,“ says Václav Berka, senior marketing brewmaster of Plzeň Prazdroj Brewery.

Actor Pavel Nový is also very much looking forward to Pilsner Fest. „The festival programme will be enriched by the Run for the Umbrella charitable event in Plzeň, which I hold very close to my heart and do not want to miss. After the run, the runners should have access to quality beer. Therefore, I gladly accepted an invitation to visit the brewery, so I could supervise the making of the batch. And I can tell you, I was very thorough,“ says a smiling Pavel Nový.