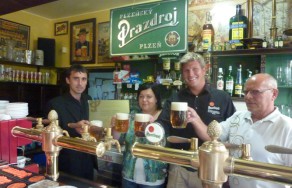 Petr Kusák, Manager of the Business Distributions Centre in Zlín, Leopold Duda, Regional Manager for the Moravian Region and Stanislav Filípek, Head of Technical Services in Zlín awarded a certificate from Plzeňský Prazdroj to pub U Kovárny for excellent care of beer from tap. Lukáš Svoboda also participated in the ceremony. With his school of serving beer from the tap, he actively participates in spreading excellent reputation. He is, in a way, synonymous with a high quality of service of Pilsner type beer, His Pilsner „to the level“ expression is a  real term.

„Even though we are a country of beer drinkers and we know how to brew good beer, a lot of pubs don’t take care of their beer, even though it deserves it, and then they blame the poor quality on the actual beer. My dream is to motivate bartenders to store and care for beer based on specifications from each brewery because they know best how their beer should be handled. And the actual service also includes friendly contact with a customer. I am always happy when I  learn about a pub that takes the maximum care of its beer,“ said Lukáš Svoboda.

The U Kovárny pub was founded as a  family business in 1993. From the beginning, they have insisted on serving good beer and, as owner Zuzana Baťová explains, that is why they chose the renowned lager Pilsner Urquell. Besides Pilsner Urquell they also offer Radegast from the tap, dark Velkopopovický Kozel and non–alcoholic Birell. The next logical step in the continuing process of great beer service was to be awarded the quality certificate from Plzeňský Prazdroj. „Of course, we realise that the certificate itself isn’t enough to strengthen our name. That is why we all try to provide the maximum care to the beer and to the restaurant. In our pub you can get Pilsner Urquell from the tap in one shot, to the so–called level. In Moravia this style is still not used very widely. However, this is the best and most economical way to serve beer and the result is beer with beautiful foam which resembles milk,“ emphasised Zuzana Baťová, owner of the U Kovárny pub.

Plzeňský Prazdroj started a  complete care programme in restaurants/bars/pubs, which serve brands from its portfolio throughout the Czech Republic. The number of restaurants and pubs which received the quality certificate reached 1025.