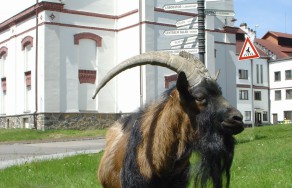 Participants of the tour will try out their luck in workshops from Kozel, which will be in front of the Visitors’ Center, in the wooden Kozel pub. With a motto „Who can, can,“ anybody who is crafty will be able to measure his/her skills with steel wool, in painting different materials and other crafty treats. As usual, Olda, the goat, with baby goats, will keep an eye on the day’s events.

Fans of the beer from Velké Popovice have an excellent opportunity to find out interesting information about its history. The tour of the brewery will give them more information about its founder, Baron František Ringhoffer, as well as about the process of how the Velkopopovický Kozel lager is prepared. The digester house and cellars, recently added to the tour, with tasting of unfiltered Kozel beer are part of the tour. Tours start every half an hour.

Your taste buds won’t get only tickled during the tour of the brewery. After a day full of fun attractions, refreshments at the local Kozlovna, before the brewery’s  gate, will be quite the treat. Even here you can savor unfiltered, unpasteurized Kozel. It is the best what the brewery has to offer and only three restaurants in Czech Republic serve it from tap. Besides liquid gold, Kozlovna offers a variety of excellent culinary specialties, such as the Beer Pub Goulash or the Roast Pork Knee on dark beer from Popovice.

As part of the tour, the town of Velké Popovice will receive a symbolic cheque with the sum of 300,000 Kč (17,604 USD). The money from the brewery will be given, for example, for equipment and renovation of the fire house for volunteer fire fighters in Lojovice, for building a road for pedestrians in the Daleška valley, or for the purchase of traffic lights to slow down the speed of traffic and for speed radar in Velké Popovice.

This cooperation between the brewery and the town is not only a one time occurrence. The town also received a monetary gift in 2010. With these funds, the town was able to finish building a children’s playground and was able to widen a  road leading to the pond. „Our investment in the region is a  long–term one. We believe that this way we help not only people living in the town, but we also make it nicer for visitors who come to the brewery,“ manager of the Velké Popovice brewery Jaroslav Hacko summarizes their activities.