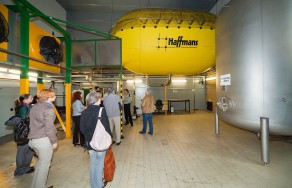 „CO2 is the result of fermentation, which is part of the beer–making process. Part of it naturally dissolves into the beer and beer–makers know this characteristic as rigour. However, excess CO2 escapes into the atmosphere. Now we are able to use the reproduced gas in a natural way to ensure a safe atmosphere for the bottling and transfer of beer. That is why we collect excess CO2 from fermentation and we liquefy it for further use in the production process,“ says Jan Šik, Manager of Sustainable Development at Plzeňský Prazdroj.

This new system of collecting CO2 contributed to the fact that Plzeňský Prazdroj received a certificate from EKO–KOM, a.s. for decreasing emissions. The certificate ensures the fulfilment of responsibilities regarding the collection of CO2 and the recycling of packaging, and it supports a decrease in the influence of waste on the environment from the drink–producing industry.

The principle of the equipment is based on connecting CO2 emitters with a collective part, a reduction station and with an accumulation container, which will soften the blows, and to a software safety protecting against overcharge during the collection of CO2 from cylindrical tanks. Technicians further installed two accumulation, heat–isolated pressure reservoirs which are used as reservoirs for liquid CO2. Thanks to the limited purchase of CO2, we will save on trips, which tens of trucks had to make to transport the gas.

„The unique gas will go to a pipeline, it will liquefy and right after that it will turn into gas again and will be once again used for production. That is why we are able to collect a maximum amount of CO2, which used to escape into the air during the fermentation process and beer production. In the last six months, we have not had to buy any CO2. It is evident that we care about the environment and the six million crown investment will be returned over the next two years,“ Jan Šik said, summarising the results of the project.