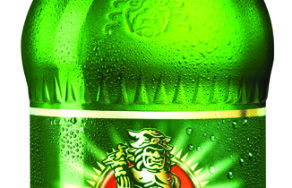 Radegast is introducing plastic bottles at the time of rising popularity of this type of packaging on the market. „The message from consumers is clear. Plastic bottles for their beers are a must. To us, the most important thing is to offer the great taste of our beer to the widest spectrum of consumers, and the plastic bottle will help us to do so,“ said Ivo Kaňák, manager of Radegast brewery, explaining the main motive behind the move.

The consumers will appreciate the new 1.5 litre packaging especially outdoors. Thanks to its resilient design, it easily withstands the impact of a stone, or falling from a backpack to the ground. Its other advantages are the possibility of gradual enjoyment of beer and the possibility to tightly close the bottle after each sip.

The shape and the design of the new bottle were created specifically for Radegast, and it even displays the face of this heathen god himself. Much attention has been paid to practical aspects of the design such as its ergonomic shape supporting easy manipulation, and its height and width designed for optimal storage capability.

Distribution of Radegast beer in plastic bottles will start on August 30. In just a few days it will be available in most of the stores where people normally buy their Radegast beer.