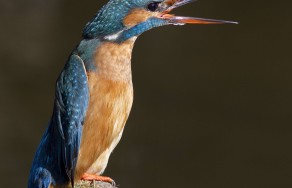 In the Czech Republic, the kingfisher is a highly endangered species, and is therefore strictly protected. It likes to nest by the slow flowing streams abundant with fish, which comprises a major part of its diet. This bird, just a little bit bigger than a sparrow, lives on smaller fish. It must eat 60% of its own weight a day. Flying, Kingfisher can reach speeds up to 28 mph.

Because of its sensitivity to its living environment, we can consider the kingfisher to be a bio-indicator of pure waters. In recent years, the kingfishers population in the Czech Republic has declined as a result of water pollution. There are just several hundred pairs left here.

In case of Velké Popovice, the situation has changed for the better. It was therefore a very joyful moment when local ecologists discovered the birds. „They probably come to fish here all the way from Sázava river, and last year they were even nesting here,“ said Jaroslav Hacko, Manager of Velké Popovice brewery.

Kingfishers were discovered on the banks of two purifying ponds that are part of the water treatment plant of Velké Popovice brewery. It is a part of the natural preserve Velkopopovicko, which is distinguished for its unique scenery and untouched, undisturbed countryside that also inspired famous Czech painter Josef Lada.

The water treatment plant was built in 2005. It uses the latest bio–technologies. As a result of the modernisation, the water that drains back to the environment is much purer. Organically polluted water is driven through purifying tanks that contain special methanogenic bacteria that eliminate pollutants and converts 90% of them into biogas. This process increases the purity of the water before it is emitted back to Mokřanský creek. It is on the banks of these purifying ponds where kingfishers are located.

„We are pleased that kingfishers were spotted right on the banks of our purifying ponds. For us, it is proof that environmental investments, such as the costly reconstruction of the water treatment plant, do pay off,“ added Jaroslav Hacko.

Environmental protection is one of the priorities of the local brewery. Besides the treatment of the water emitted from the brewery, they are also trying to lower the consumption and use of water used to produce one hectoliter of beer. While the world wide average is 5 hl of water to produce 1 hl of beer, Velké Popovice brewery uses only 3.64 hl, which places them among the most economical and the most ecological breweries in the Czech Republic.